On its introduction to this country, the Monkey Puzzle immediately became popular as a specimen tree in parks and gardens of all sizes in Devon, sometimes in most unsuitable places, such as villa front gardens.  A more effective use was as an avenue tree leading to a grand house.  A remarkably successful planting is seen today at Bicton College, Budleigh Salterton, where Head Gardener, James Barnes, under the direction of James Veitch, of the Exeter Veitch Nursery, planted a Monkey Puzzle avenue in 1844, the longest in Europe, about 500m, two rows of twenty five trees, equally spaced, in opposite pairs. All the mature trees have cones.  Seeds have up to 80% viability; seedlings raised at Bicton are used when there is a need for tree replacement, so maintaining genetic continuity.  Today a few of these trees have county champion status, one for girth of 399cm with a height of 26m, and another for height of 29m with a girth of 339cm, both measured in 2001. Remarkable Monkey Puzzle trees occur at other sites throughout the county, including Arlington Court, Ilfracombe, Sharpham House, Totnes, and Mamhead, Exeter. 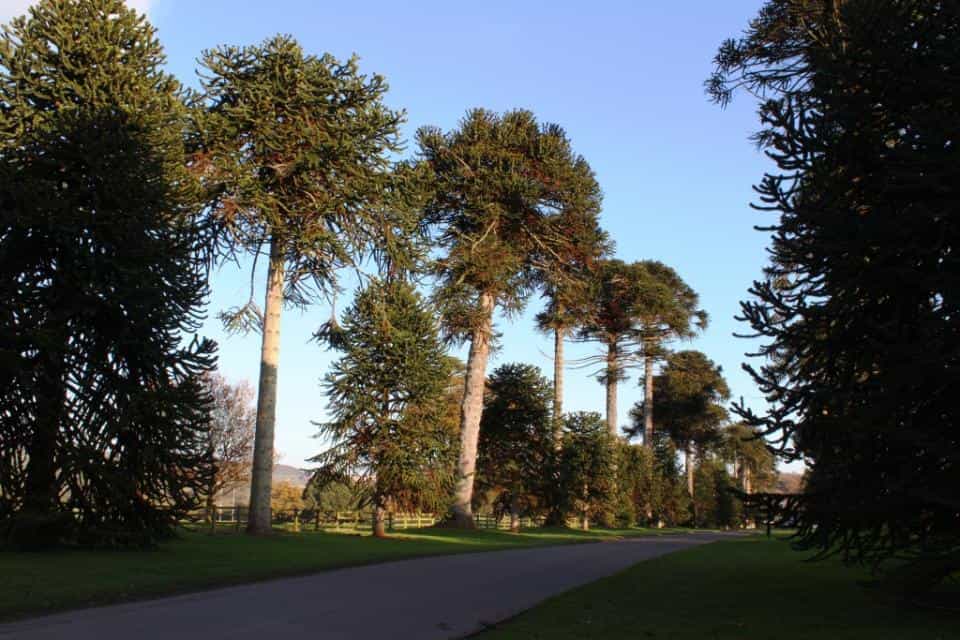 The earliest introduction of the Monkey Puzzle into Europe is believed to be due to an expedition to Valdivia, southern Chile, in 1642, and subsequently represented by an engraving in a garden at Keleve, North Germany showing a tree with six whorls of branches, clearly Araucarian, made about 1650. The Spanish traveller, Dendariarena, looking for naval timbers, noted it in 1780.

Later in 1795, it was  introduced into England by Archibald Menzies, Acting Surgeon and Botanist to Captain George Vancouver’s voyage of H.M.S. Discovery 1791-95. The Discovery was a Whitby collier with cramped accommodation, far from Joseph Bank’s ideal for plant collecting purposes, and Menzies use of a crew member to aid with on board processing of specimens, led to friction between Menzies and Vancouver.

The Discovery, having traversed the Pacific, turned south along the coast of Chile to Valparaiso, where the Spanish Viceroy entertained officers of the expedition to dinner. At dessert, seeds were served which Menzies did not recognise; he put five in his pocket, possibly at risk to himself, because it was thought to be forbidden.  Later he sowed them in a frame on the quarter deck and returned to England with five healthy plants which he gave to Sir Joseph Banks, who planted two in his garden by the Thames; they became known as Joseph Bank’s Pine.

There was a further supply when The Royal Horticultural Society sent James Macrae on a journey around South America, 1824-1826, but Araucaria seeds were still not widely available until James Veitch sent plant collector William Lobb to South America in 1840. Lobb succeeded in collecting a large quantity of seed from which Veitch raised some thousands of plants then offered commercially at a relatively low price, plants 4-6 inches, £10 per 100, or 30s (£1.50) per dozen, and later 10 guineas (£10.50) for a small tree. It was from this that the Victorian fashion for these trees became popular. It is one of the most remarkable trees ever introduced into Britain.

It was after 1850 that a lawyer visiting Pencarrow, Cornwall, on seeing one of the young trees, remarked, “it would puzzle a monkey to climb that”.  Today, there is a Monkey Puzzle avenue leading to Pencarrow House.

The Monkey Puzzle is one of the few hardy South American trees in Britain. It can grow up to 30m (100 feet) in height, with a trunk up to 1.5m (5 feet) diameter, tapering only slightly, branches in whorls, lateral but becoming pendulous, bearing spirally arranged, crowded, overlapping, tough leaves which end in a point. Leaves last for many years.  Young trees are beautifully conical in shape, but become umbrella shape with age. Longevity is believed to approach one thousand years.

Male and female cones usually, but not invariably, occur on separate trees. Male cones, 7-12cm (3-5”) long, have sharp pointed recurved scales, and may persist on the tree.  Female cones are globular, 10-17cm (4-7”) long, take 2-3 years to mature, in each the cone scale bearing one ovule is formed from an almost total fusion of the typical conifer bract and ovuliferous scale, and fall to pieces as the seeds ripen.  Pollination is effected by wingless pollen grains, blown by wind on to the female cone scale, where they germinate and grow through ridges on the scale surface towards the ovule micropyle, through which the nucellus projects for reception. The whole system is remarkable in its similarity to the later evolved Angiosperm pattern, but predating it by many millions of years. Seeds are up to 1-1½” long, but not produced until the tree is about thirty years to forty years old. Seeds, nutritious,  roasted or ground to flour, are still an important part of the diet of the Americanos people of South America.

Extensive felling of trees for commercial purposes has led to the monkey puzzle being listed as an endangered species.  Conservation is effected through co-operation between various organisations and landowners, and reafforestation by raising new plants under greenhouse conditions.  Areas which are climatically suitable can act as refuges for endangered species, as at the Eden Project, where a new Chilean Arboretum covering an hectare of land at the edge of the Eden pit, includes A. araucana.

The family Araucariaceae has a long fossil record from the first half of the Mesozoic; the earliest records are from the Jurassic in the northern hemisphere, but all extant members occur in the southern. Araucaria fossils are grouped under the form generic name of Araucarites.  Wollemia nobilis (Wollemi Pine - see above) exhibits both morphological and reproductive characters intermediate between Araucaria  and Agathis (kauri pine).  The geographical separation of Wollemia, Australia, and Araucaria, South America, can be explained by the break up of the southern supercontinent, Gondwanaland, in the early Jurassic, about 184 mya, when South America began to drift westwards.