One of the most exciting additions to the tree component of our Devon gardens in recent years is the Wollemi Pine, Wollemia nobilis.  Still young and relatively small, it has potential for considerable height, but with the bonus of withstanding coppicing to a bushy form. Considering the original habitat, it is surprisingly robust.  In Devon we have records of plants surviving -16°C. 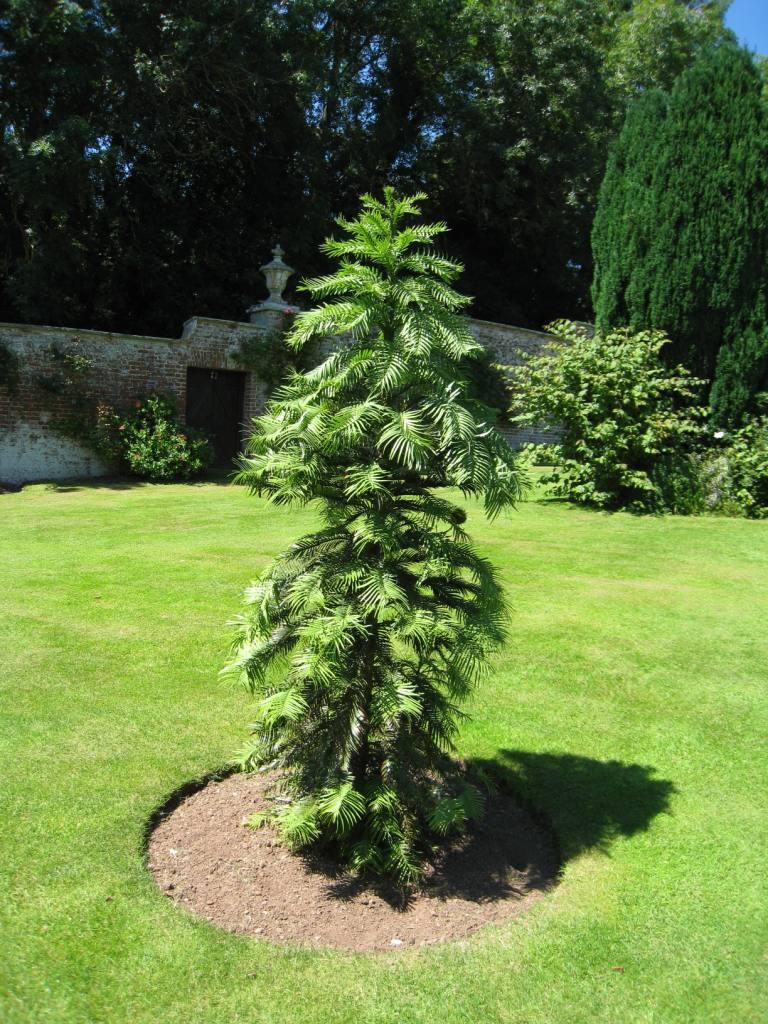 Predictions that these trees would be indoor or patio plants appear unfounded; they seem to have a great future as substantial garden trees.  Their form, however, may be determined by environment. Under sheltered conditions branches droop and are similar to plants in their native habitat.  More exposed conditions lead to a rigid appearance owing to branches lying almost horizontal. Devon trees are now producing both male and female cones.

Wollemia wasdiscovered in 1994 by Park Ranger David Noble and two colleagues, when exploring the Wollemi National Park in the Blue Mountains, about 100 miles from Sydney, Australia. They descended into a canyon to find a gully with distinctive vegetation, including a grove of trees which the explorers did not recognise.  David Noble took a leaf sample, which when later scrutinised by botanists, was pronounced a new species and named Wollemia nobilis after its location and discoverer.

The trees, tall and slender, bore branches with evergreen leaves arranged some laterally and some in two upstanding rows, changing from apple green to blue green as they aged.  A notable feature of the trees was the presence of multistems giving a bushy appearance, in contrast to other conifers.

The multistem habit may be a significant survival feature for a plant subject to fire, drought or rockfall. Other curious features of these plants were a bark that looked like bubbling chocolate, which we now know starts to develop at about five years of age, and white waxy caps over the buds which probably are protective in cold weather. As the trees were not suitable for climbing, cone material was collected aerially from an helicopter.  Male and  female cones occur on the same plant, at the tips of separate branches, the male cones long and cylindrical, the female globular and spiny.  We now know cones are produced when a plant is about nine years old, but they are probably not sexually mature until between 12-15 years.

Much can be learned about the history of a species from its pollen grains which have remarkable survival properties owing to their exceptionally tough and chemically complex coats of “sporopollenin”. Palynologists first recognised, in 1965, a distinctive type of pollen which could not be ascribed to a species, but seemed similar to Araucaria.  It was given the form generic name of Dilwynites. This pollen is now recognised as present 90mya. Modern Wollemia pollen is identical with Dilwynites.

Wollemi pines have survived in the wilderness more than 60,000 years of aboriginal farming, and 200 years of European occupation of  Australia.  Threatened development lead to the area being designated a national park in 1979, so there is some protection for these rare trees.

While there was an aim to keep the discovery secret, their existence became known.  Not only were the trees botanically significant, they were an horticultural treasure with enormous monetary possibilities, so a desirable property.  There was even a story of a German raiding party anxious to obtain specimens.  Although other stands of the pine have since been discovered, information on location is restricted to prevent collectors contaminating sites by introducing pathogens. Even now the plants are threatened by the root rot fungus, Phytophthora cinnamomi

Australian scientists, faced with the problem of maintaining security, with its consequent difficulties, decided a more productive strategy would be to make the pine widely available to horticulture.  Now many thousands of trees have been grown in a ten acre facility, which has stringent precautions to prevent contamination, a partnership between the Queensland Government and a private nursery.  The New South Wales Government programme for conservation of the Wollemi pine and other threatened plant species, is supported from royalty of the sales.  Today the pine is widely available.

Wollemia nobilis is a threatened species, with a high rate of extinction, there being fewer than fifty mature plants in the wild.