This tree(Sophora japonica) is sadly under represented in Devon. It is found as a specimen tree in a few domestic gardens, surprisingly in a small front garden where it overhangs the road in a suburb of Exeter and in larger sites with public access, such as Dartington Hall, the Radford Arboretum and the RHS Garden at Rosemoor.  It features more frequently in tree collections as in the Streatham Campus of Exeter University (sites: Amory Building, Birks Hall and Lafrowda), and the National Trust (Killerton and Greenway). 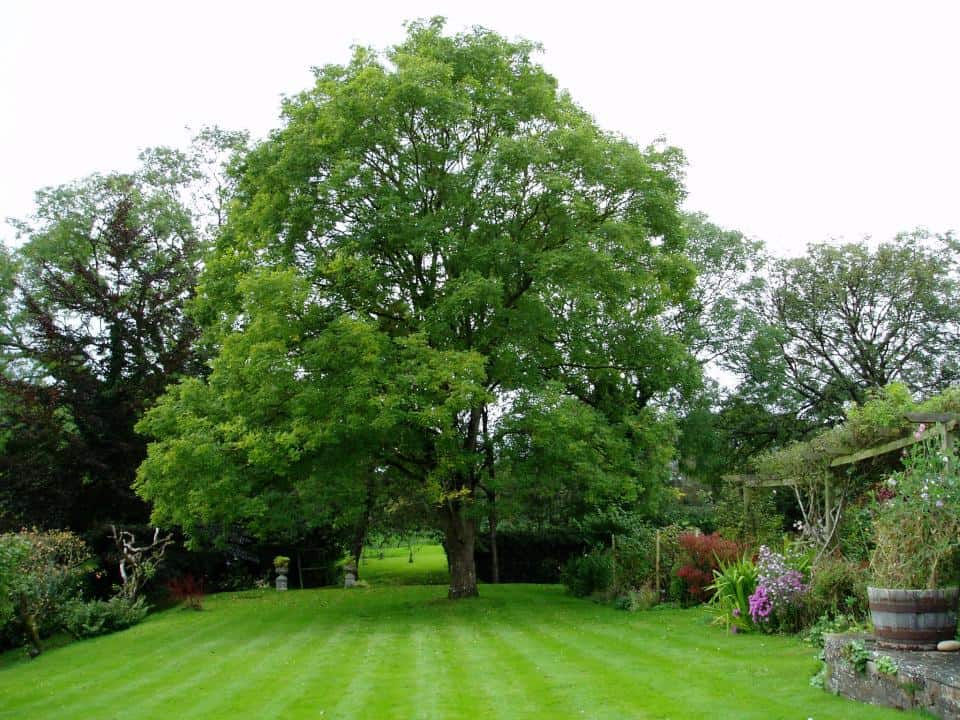 The relatively late introduction into cultivation in the west was a consequence of China being closed to the western world up to C18, until incursion by Jesuit missionaries.  In 1742 a team of missionaries, which included Pierre d’Incarville, was sent to advise Emperor Ch’ien on the cultivation of European flowers for his ‘Garden of Perfect Brightness’.  As a result of supplying him with Mimosa sensitiva, a species which the Emperor much admired, d’Incarville was given more freedom to move around Peking and the neighbourhood, enabling him to collect plants to send to Europe. Initially plants were sent by sea, but so many were lost that an overland route was selected through Mongolia, Siberia, Moscow, and European countries with prestigious botanical establishments.  In 1747 it was introduced into France, in 1753 to the UK by Essex Nurseryman, James Gordon, followed by planting at Kew in 1760. One of the original planting at Kew survives in a much twisted form, branches supported by props and protected from the public by a fence.

The Pagoda Tree grows to a height of 30m. with a broad domed canopy of  twisted branches spreading to 20m. It can withstand temperatures down to -15°C.  Shoots, vivid green when young,  bear compound pinnate leaves up to 25cm. long; leaflets (3-15) opposite pairs, smooth edged, pointed,  3-6cm long.  Bark is gray-brown with criss-cross ridges.  In general flowering does not occur before the tree is about 30 years old and is more likely in a good summer. Flowers, pea like, yellow-creamy white, occur in panicles up to 30cm long, sometimes obscured by dense foliage, are pollinated by bees. The distinctive fruit, a lomentum, is a pod constricted between the seeds, which dehisces into one seeded parts.

Little is known about its geological history.  The recent natural range is not certain, being clouded by many centuries of cultivation. Plant hunter, Ernest Wilson in his 1907-1909 explorations, reported it as common in Western Hupeh  and well represented in the arid valleys of western Szechuan.  It possibly only occurs wild in the Chihli province of northern China, but it has been widely cultivated in China, Korea and Japan, in association with centres of learning or religion, hence the common names, Chinese Scholar Tree and Japanese Pagoda Tree.

Conservation, survival and use

There is no apparent threat to survival, as its natural sites are not currently at risk, and it is sustained by an horticultural interest.

Its qualities of preference for high temperatures, dry conditions and attractive, highly scented flowers, stimulate architects, particularly in the USA, to use it as a landscape tree in public places.  However such desirable qualities are negated by a tendency to drop flowers and leaves producing an undesirable mess on the ground.

Possibly its use as a garden tree is constrained by size potential.  However, smaller versions are available and more appropriate for modest gardens. ‘ Pendula’, a strongly weeping form, first seen by Robert Fortune in Shanghai in 1853, is now produced horticulturally using a rootstock grown to a suitable height for grafting, on to which are grafted cuttings of  S. japonica ‘Pendula’. The effect is a straight trunk with a cascade of twisted branches.  It very rarely flowers. Other cultivars include ‘Regent’, rapid growth, dark green foliage, flowering early at about five years, ‘Pyramidalis’ a narrow upright form and ‘Violacea’ with mauve flowers.

Further uses include the strong and flexible wood for ship and carriage building.  A yellow dye can be extracted from the flowers.  Medicinally it is one of a group of essential herbs used in Chinese medicine.  Extracts of bark are used traditionally as a hemostatic. Today there is interest in its use for vitiligo as it enhances melanin synthesis.

The name Sophora japonica created by Linnaeus 1753 is accepted on the basis of priority. The name Styphnolobium was proposed in the 1890s for a small group of species, but the name did not become established. There is no requirement currently to use Styphnolobium, as it has not been included in the list of conserved names in the International Code of Botanical Nomenclature published after the 2011 Congress, although some prefer to do so. Beyond compliance with strict taxonomic rules, the somatic chromosome number is a helpful guide to affinity. Some Sophora spp. have a somatic chromosome number 2n=18; for Sophora japonica  2n=28.  S. japonica was used by Schott in 1830 as the ‘type’ species for the new genus Styphnolobium.  While different chromosome numbers can occur amongst species in a genus of herbaceous plants, it is less frequent in woody plants, where variations are due to polyploidy, a multiplication of the basic number. Allocation of species to Styphnolobium is supported by nitrogen fixation physiology.  Roots of Sophora contain nitrogen fixing bacteria, those of Styphnolobium do not.

While there may be a case for naming the Pagoda Tree Styphnolobium japonicum, there is still no general acceptance of the generic name, probably because of its clumsiness.